Every year, the O’Fallon-Shiloh Chamber of Commerce recognizes businesses that have contributed the community in several categories: Economic Impact, Beautification and Heritage. The Awards are presented at our Annual Salute to Business Award Luncheon, typically held at The Regency Conference Center.

This year, due to COVID, we are celebrating our Salute to Business Awards a little differently. Every month, we’ll highlight one of our 2020 annual award recipients. We hope you enjoy finding out about some of these awesome Chamber members!

Click each image below to view details and watch the video

Spirit of the Chamber Award 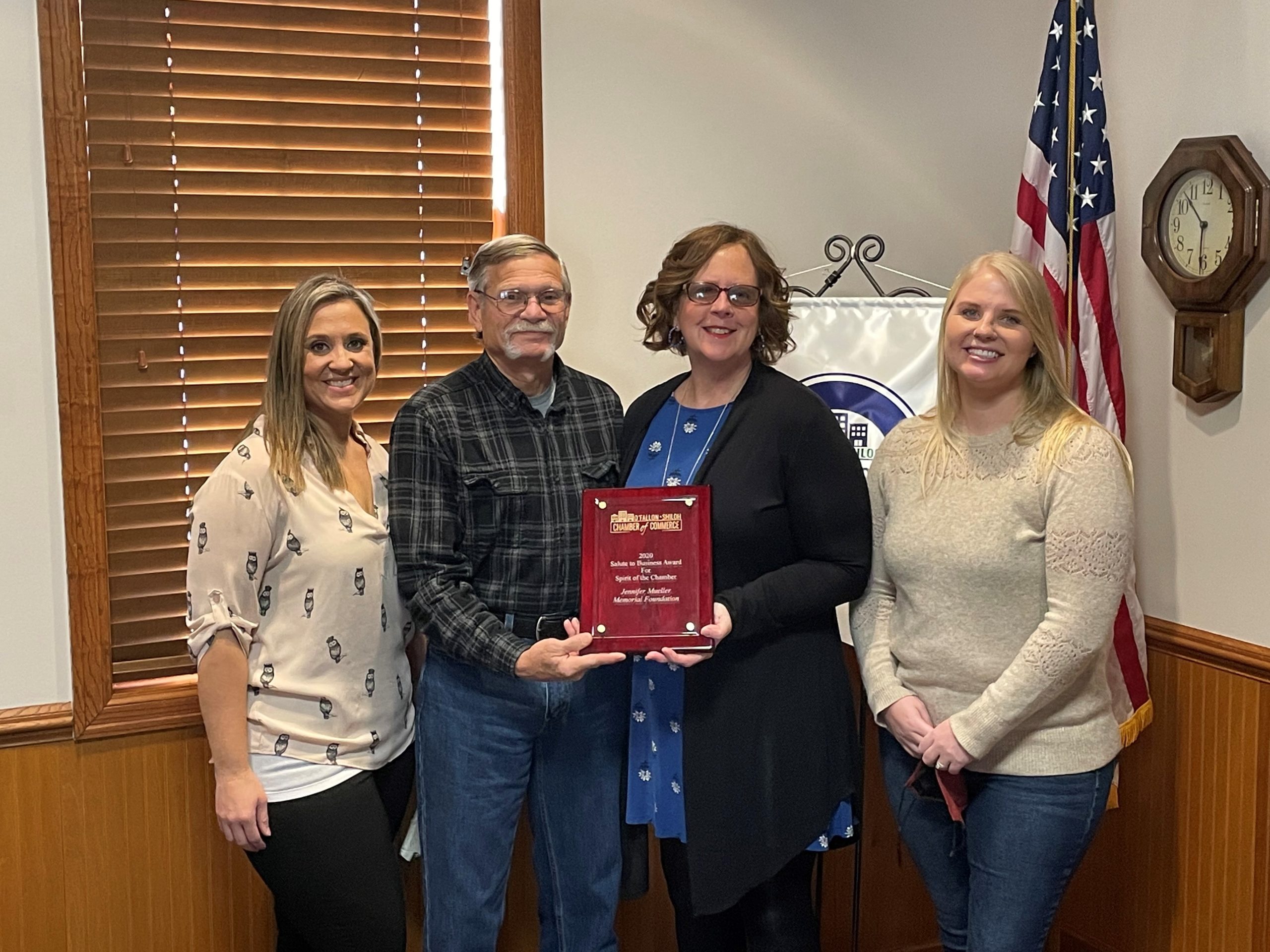 Spirit of the Chamber Award

The O’Fallon-Shiloh Chamber of Commerce created the Spirit of the Chamber Award in order to recognize a business or organization who goes above and beyond doing great things for our Chamber and our Community, and demonstrates excellence in collaboration with others to make a positive impact in the community.

Our 2020 Spirit of the Chamber recipient is the Jennifer Mueller Memorial Foundation.

Jenn Mueller was Operations Director of The Egg & I O’Fallon and the daughter of the owners, Gary and Cathy Mueller. Jenn was very active in the community, participating in the O’Fallon-Shiloh Chamber’s very first Leadership Institute, a leadership program that educates, trains, and prepares individuals to better serve in their community. Jenn was involved with many other charitable causes in the area.

Jenn was diagnosed with Fibrolamellar Hepatocellular Carcinoma in 2010, passing away January 17, 2018. Her family and friends want her charitable legacy to endure, so they established the Jennifer Mueller Memorial Foundation.

The Foundation hosts a 5k race in the summer. The 3RD Annual Race in 2020, unfortunately, was cancelled due to COVID restrictions, but they plan to come back fierce in 2021! Since they were unable to host the race, the held a number of yard sales this year. The race and yard sale proceeds currently provide scholarships to Jenn’s college alma mater, Colorado State University. Their future goal is to expand their mission with the hopes of helping even more people. They’ve currently donated close to $20,000.

Sean Toolen, Co-Owner of Toolen’s Running Start and a member of the Foundation’s Board of Directors, tells us he got to know the Mueller family through The Egg and I O’Fallon. Jenn and the rest of the Mueller family made pancakes for the Toolen’s Annual Top of the Morning 5K and then started working with other races in the community doing the same. Sean knew about Jenn’s health battle and when the family decided to host a 5K in Jenn’s memory, he reached out to be part of the race. Sean says, “The family is phenomenal with helping others and we wanted to help them have a successful race. The race was to keep Jenn’s memory alive and to give back to the community. This family always goes above and beyond. Even though they don’t have the restaurant anymore, they’re still involved in the local racing community making pancakes! They currently support the John Wild Run, Bradley Smith Run, EK Color Run, and the Habitat for Humanity Run, just to name a few. They don’t do it for praise or recognition – they just want to help people.”

Watch the Spirit of the Chamber Award Presentation Video

Jenn was very much a part of the Chamber’s military affairs committee. You’d see her serving the airmen on base when we sponsored dorm dinners. During our Salute to Scott event, few worked as hard as Jenn did to feed the masses. Jenn did these things even during her illness – service was a huge part of her life.

Jessica Lotz, Chamber’s Leadership Institute Coordinator, cannot imagine Lead In without Jenn. “Jenn never missed a meeting. She came with a smile on her face and gratitude in her heart. She contributed to discussions frequently, often offering the human side of business discussions. She recognized the uniqueness of each individual and honored those differences by helping us see how very different people can work together.”

Scholarships have been given to the Chamber’s Leadership Program as well as to hospitality students at Jenn’s alma mater. One of the recipients stated, “Your generous scholarship will help me accomplish my goal to graduate in 3 years and be able to take my new degree to new corners of the world to change hospitality wherever I go. I also hope to use my career to start a business one day that will help my local community.” Another recipient says, “My goal is to leave a positive impact on as many people’s lives as possible.”

Jenn Mueller and the entire Mueller family are community and service-oriented. The family continues this in Jenn’s name – what a legacy Jenn left behind. Follow Jennifer Mueller Memorial Foundation on Facebook.